This is another of my older Barbies who has remained a firm favourite. She is Riviera Barbie from 1999. There were the usual choices of blonde, brunette redhead and I chose her because I liked her green eyes and  I loved her hair which is soft and silky and a gorgeous colour. I think she was my first red-haired Barbie too. Her name, Polly, predates my cat by more than 15 years. Polly arrived wearing a green and yellow horizontal striped halter dress and yellow shoes. There were blonde and brunette versions as usual wearing versions of the dress in other colours, I can’t remember what they were but I will guess pink and blue. Ha ha, I just googled and discovered that I was right about that and that there was a fourth doll an African-American version who wore the same colour dress as blonde Barbie. They tended to do that a lot in the 90s, release four dolls as Barbie with identical faces, only different in hair and clothing colours. I prefer the Barbie friends idea myself.

Here is Polly in a couple of Fashion Avenue outfits.

Anyway I still think Polly is a pretty doll even if she has the typical Barbie look of the time. 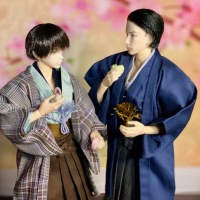