When Barbie Was At School – Thoughts On Vintage Fashion Dolls


A recent post by fellow doll blogger Zanka_ Dee got met thinking about the way that fashion dolls were marketed when I was a child. I don’t know what Mattel, Ideal, Pedigree and others were aiming for exactly but these are my perceptions of these dolls.

As you know I am from England and came to Australia as a young child so I grew up being familiar with Sindy as well as Barbie and to a lesser extent Tammy and Tressy.

Tressy was the first fashion doll I got and I recall her being marketed as a hair play doll. I saw television commercials for her. Tressy was made by Palitoy in England under licence from American Character so the dolls were fairly similar if not the same. I never really got into hair play and don’t recall that there was much Tressy merchandise available where I lived. I did get one proper Tressy outfit which I still have.  I was never really aware of her back story at the time and never became a big fan of Tressy the way I did my other fashion dolls.

Sindy was the big thing in England, even though she was based on Ideal’s Tammy in looks I think of Sindy as more of a young adult doll where Tammy  started out as a younger teenager. Barbie is now such a long-lived girl  and has had so many makeovers that it is hard to be sure how old she is supposed to be but back in the early sixties she was clearly a high school girl although obviously a more sophisticated teen than Tammy.

Tammy and Barbie had outfits that related to the American teenage experience. They participated in school events, they went to proms and Soda Shops and had after school jobs. Later they started to have careers like teacher and nurse which were probably what many girls expected to be when they grew up and more glamorous looking ones like airline stewardess and fashion model. The first Barbie commercial back in 1959 makes it very clear that Barbie expects to get married one day although here we are fifty-six years later and she’s still single.

Sindy was a very British doll I think. I can’t recall any of Sindy’s early fashions being for school activities so I presume that she was meant to be more than seventeen. She had the careers too, nurse and stewardess being the main ones I remember from my childhood but her life was more like a glamourised version of real life. Sindy went on ski holidays, ice skated and had her very own horse. She drove her own car and went on dates with her boyfriend but she also went shopping for groceries and cleaned her house. She was a grown up. 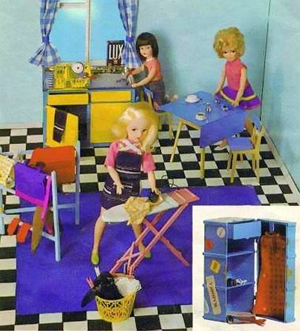 I would have loved this 1980s Sindy kitchen.

Tammy, on the other hand lived with her parents and siblings and her life was probably more like “The Patty Duke Show” but without the identical cousin gag.

Most fashion dolls today seem to come with some kind of back story. “Life in the Dreamhouse” and the various Barbie adventures that have been made into movies or webisodes if that’s the right word are much more rigid than the original concepts which was just to present the dolls and the appropriate accessories and leave the child to make up the stories.

I’m not too familiar with Fashion Royalty or Tonner dolls but those seem to have incredibly complicated and adult themed back stories, that’s fine. I think most adult collectors make up their own stories anyway if they like to redress and reimagine their dolls.