Janie and her Doll

Collecting reproduction paper dolls is a great way to learn about the many different paper dolls that have been produced over the years. They are such fragile toys that the chances of finding a mint set of vintage dolls is not very good but now that there are a lot of people reproducing paper dolls from every decade of the twentieth century we can all have the pleasure of seeing them.

Some sellers sell hard copies on good quality paper, others will sell you a disk with a whole collection of dolls on it while others will sell them to you as a digital download. Naomi has done all three. She has vintage dolls, she has bought reproduction books some of them as presents for me. She has downloaded dolls from the Free Paper Doll site and bought a couple of discs from an eBay seller. Each are good ways to collect depending on how much space you have and what you intend to do with the dolls.

Naturally I was keen to feature some of these dolls on the blog but as I wanted to do the right thing by the seller I contacted her to ask for permission to reproduce some paper dolls from the disc on the blog. Like most people I have contacted so far Monica, who runs the Print’n’Sell website as well as an eBay store was kind enough to agree that I could. I have had a quick look at the website and as well as paper dolls Monica also has other paper toys like models and dioramas, there is also a blog on the site which I will go back to read another day.

The paper dolls featured in this post are all from the disc that Naomi bought.

This were published by Saalfield in 1943 and were based on a radio program of the same name which featured an all girl orchestra. The dolls are called Evelyn, Vivien and Maxine.Here is a page of  clothing.

This set is also available on the Free Paper Dolls website.

This is a set of 3 children; Tommy, Peggy and Janey. I’ve seen a few sets of them separately and they were designed by Queen Holden. The little outfits are cute and there is some nice artwork in the book too. This set was published by Whitman. Barbie, Ken, Midge, Allan and Skipper with a few costumes for their theatre productions. There are not a lot of costumes in this but the graphics are nice. I remember reading Trixie Belden books as a child. Here are outfits for Trixie, Marty, Honey and Jim. Published by Whitman in 1956. 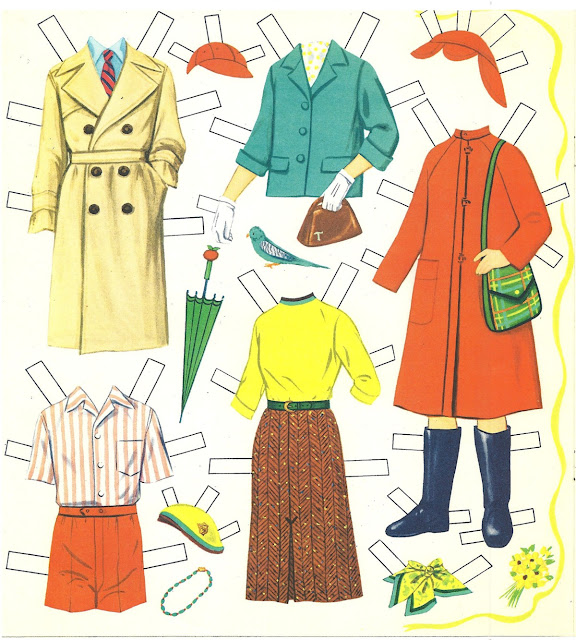 Janie and Her Doll

Janie and her doll is from the late 1930s or early 1940s and has rather a hand coloured look to it which  I rather like. The copy on Naomi’s disc says “copyright 1941 by Samuel Lowe Company, Kenosha, Wisconsin. Here is a page of Janie’s outfits. I hope you have enjoyed seeing some of this lovely vintage paper doll sets. I’ll be back with some more very soon.