It has been some time since the last Fashion Fever Closet post so last week I photographed two more to share with you all.

The first one is from Wave A and is a summer themed closet with a dress and some little skirts and tops.

Miranda is first wearing a green sleeveless top and a denim skirt with  a frayed hem. For a belt she has a multicoloured sash. Pink slip on sandals complete the outfit. This skirt was looser on Miranda than on the Fashion Fever body dolls but worn low on the hip it still fits.

April has a yellow knit fabric dress with green trim and spaghetti straps (very fiddly to tie up). I find that while I don’t really like Fashion Fever skirts on Basics bodies the dresses usually fit quite well and look nice. April was already wearing this dress when I went looking for the pieces for the closet. I left it on her because I hate doing up those sandals with the tiny knob at the back of the heel. How children do it I just don’t know.

Bernadette has one of the older twist and turn bodies which are often still used for character dolls. Her skirt is a bit loose but despite that I think the outfit rather suits her. I thought that the accessories for this closet looked best with this outfit.

I can’t remember if I have featured Bernadette before in a post. If I had it was under another name. For some reason I can never remember what I called her. Today when I was getting her ready her smile reminded me of Bernadette from “The Big Bang Theory” so that is her new name and hopefully I will remember it.

It was at this point in the shoot that I realised that I did not have the white jacket with pink trim in the bag with the rest of the clothes from this closet. Shooting had to be abandoned for the day while I searched  for it. Was another doll wearing it? No. Was it mistakenly put in the wrong bag? I checked all the closet bags and could not find it. Yet I knew that I had that jacket somewhere.  I went back to the computer to look for a better photo of it and finally realised where I had stored it. It was in a bag with a pair of jeans which I had thought was a solo outfit.

Now I had my answer but it was bugging me, if the jacket did not go with those jeans what did? Another Google search which was frustrating because now when I google Fashion Fever I often get my own photos. Not helpful! eBay provided the answer. The jeans were a solo item. “Trendy jeans 2004”. I’ll show them to you another time.

So finally Bernadette got to wear the jacket which surprisingly fitted her quite well despite her being more well endowed than the Fashion Fever  girls.

Apart  from the fun I get sharing my collection with all of you, doing the Fashion Fever Closet series has been very useful in identifying what I have and returning strayed items to their correct closets. In the case of the white jacket I think I had it in the wrong bag for several years.

Next time I’ll show you a closet from Wave B. 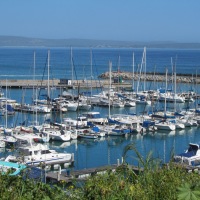