Vintage Visitors – If It’s Tuesday It Must Be Ideal

Another interesting doll that Naomi bought when we started our collecting hobby is Ideal’s Tuesday Taylor. Neither of us knew a great deal about these dolls so I’ve been doing some researching online and apart from the Doll Reference site which is always good for names and dates I found an excellent site called Jewels Doll Castle that has a lot of information about her and other dolls of that era. I have included my references at the end of this post.

By the 1970’s  Ideal had pretty much discontinued the Tammy line. However, in 1974 they produced a larger fashion doll named Tiffany Taylor.  Tiffany was 19 inches tall and was produced until 1976. She had twelve outfits of her own and was also produced as an African American doll. Tiffany Taylor’s gimmick was her flip feature hair. Her scalp could be turned around and on one side her hair was blonde and on the other brunette. You can read more about Tiffany Taylor here.

Tuesday Taylor was released between 1976-78. She is an 11 1/2 inch fashion doll with similar proportions to Barbie. Like Tiffany, the first edition of Tuesday Taylor had the flip feature scalp. In fact she is not dissimilar in features to her bigger predecessor.  She also had rooted eyelashes which I think might have been a first for a fashion doll back then. Tuesday was marked “©1975 IDEAL H-248 Hong Kong” on her neck.

There was also an African American version of this doll who was called Taylor Jones. Ideal also released fashions for Tuesday and Taylor which were tagged Ideal Tuesday Taylor.

The later editions of Tuesday Taylor did not have the hair play feature, nor did they have rooted eyelashes. The later dolls were:

Suntan Tuesday Taylor: She was the second edition of the doll and was a more pink/orange “suntan” skin tone. She wore a white bikini a colourful kaftan and white shoes and came with a set of “Suntan Doodles”. These were supposed to create a tattooed effect when the doll was exposed  to sunlight. I am surprised that they got away with this considering the fuss made about Butterfly Art Barbie two decades later.

Beauty Queen Tuesday Taylor: This doll wore an orange bathing suit with a yellow ribbon sash and orange shoes. The shoes had magnets on the soles to attach to her stand.

Tuesday Taylor Super Model: She was the last Tuesday Taylor and  had a walk feature using a stepper. Photos I have seen suggest that she has a twist waist and I’ve seen eBay  descriptions of this doll having bendable legs. She also has more curly hair than her predecessors. There was also an African American version of this doll. Tuesday was marked “© 1977 IDEAL H-293 HONG KONG” on her neck.

Ideal added a couple of companion dolls to the series at the same time as they released Suntan Tuesday Taylor. They gave her a little sister Dodi and a boyfriend called Eric. For Dodi they reused not only the name but the head and body mold of the Tammy family friend Dodi. Dodi also had a suntan feature. Eric is an odd looking  12 inch doll whose head seems to small for his body. The first edition of Eric wore a brown polo neck top and tan pants. Eric was also issued as a Suntan doll wearing beach wear.

Tuesday had a vacation home with a rather unusual feature. It could be changed from a  ski chalet to a beach house! She also had a Penthouse of her own with accessories. The Penthouse had a big picture window and the view could be changed from day to night.
Here are some old ads for Tuesday and her accessories. I must admit I would love to have this penthouse apartment. I think it is much nicer than the predominantly pink doll houses made now.

Once I had finished reading up on Tuesday Taylor I examined Naomi’s doll more thoroughly. Her body is marked on her bottom “©1975 Ideal, Hollis N.V.11423. Hong Kong P”.There is no twist and turn feature. She has straight non bending limbs and a suntanned skin tone. She has blonde hair and blue eyes. On the back of her head she is marked ” © 1977 Ideal, H293 Hong Kong”

Tuesday is wearing proper Tuesday Taylor shoes (Barbie shoes don’t fit her) but I am unsure what she was wearing when Naomi bought her. I think she came from a shop that sold secondhand dolls in an inner Adelaide suburb which we used to visit a lot pre eBay. I hope that if she can remember what Tuesday came wearing she’ll let me know or post in comments.

The head marking is the same as the Super Model doll but the hair and body type are wrong. However, I’m thinking that  perhaps all the dolls that didn’t have the hair play feature had the same head markings.

My best guess is that she is Beauty Queen Tuesday Taylor. From the photos I’ve seen the hair, make up and skin tone look about right. Beauty Queen was supposed to have had orange shoes but then she might be wearing shoes from another doll or another outfit. Suntan Tuesday Taylor seems to have longer, straighter hair.

As we don’t have any Tuesday Taylor fashions to show you here is Tuesday modelling some other fashions.  I don’t have many 1970’s Barbie fashions so she is wearing one seventies outfit, a fashion avenue outfit from the late nineties, an outfit made for Mikelman’s Charice from about 2000 and a home-made dress.

The Jewel’s Doll Castle site does have pictures of Tuesday’s outfits so check out the link at the end of this post.

Tuesday wears a pinafore dress which is a Barbie fashion from1975 with a generic lace blouse from the same era. 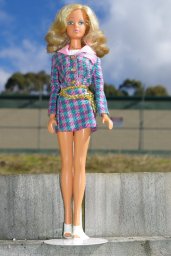 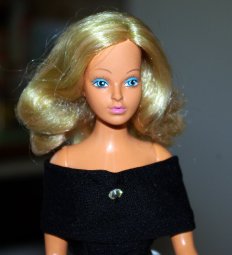 Made by me fashion

Tuesday wears a dress I made.

Borrowing an outfit from Charice. 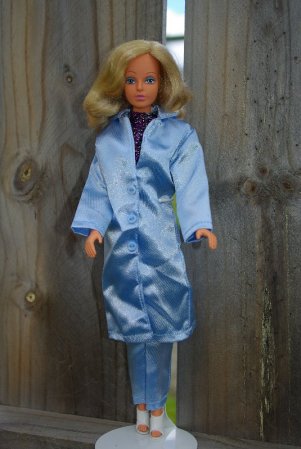 Here Tuesday wears an outfit for Charice by Mikelman .

Although she was only produced for a very short time the features that Ideal came up with for Tuesday and for her accessories make  her a very interesting  and innovative doll. 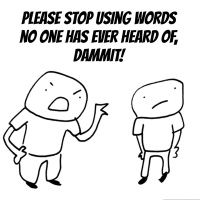 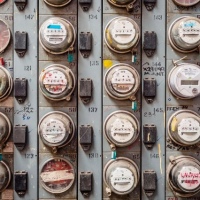