This week I’d like to show you another set of celebrity paper dolls that even I have heard of. Donna Reed.

This set is a bit different from some of the previous ones. During our online searching to identify dolls Naomi and I discovered that sometimes the older celebrity paper doll sets were rereleased without the celebrity’s name attached. Possibly the financial arrangement with the star had ceased so the company was free to publish the paper doll book any way they pleased.

This particular set was released as Glamour Girl. Naomi has some original paper dolls in poor condition which she recognised as Donna Reed but she also has a boxed set on heavier cardboard of Glamour Girl with the exact same outfits but with no mention of Donna Reed who presumably didn’t benefit from them financially.

For those too young to remember Donna Reed was a star of movies and television, born in 1921 in Iowa. Her real name was Donna Belle Mullenger. She is most well known for her roles in the iconic move “It’s a Wonderful Life” where she played Jimmy Stewart’s wife and “From Here to Eternity” for which she won a best supporting actress award for her portrayal of  Alma the dance hall prostitute.

Later Donna had her own television show which ran from 1958 -1966 where she played a housewife and mother.  Younger readers might also remember her playing the character of Miss Ellie for one season on the TV show “Dallas”.

Donna Reed died of pancreatic cancer in 1986. I have included links at the end of this post should you wish to read more about her.

Now to the paper dolls. Here are the original and reproduction dolls. As you can see the older dolls have been taped and stapled.

As seems usual with these sets there were two dolls in two different poses with outfits for each. The original clothing is in very poor condition and hardly any of the outfits have tags so instead I’ve laid the dolls flat so you can see what the outfits look like and have included pictures of the reproduction clothing. I didn’t wish to cut these out as they are not my dolls but perhaps one day Naomi and I will do that so that we can show them off better.

One set of original outfits

Donna and her original clothing.
Here are the reproduction sheets. 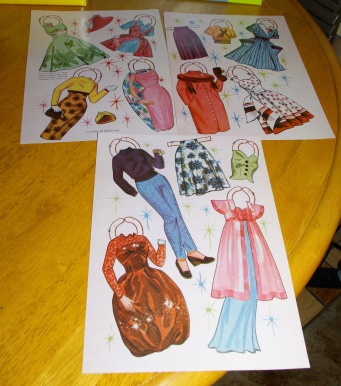 Here are the reproduced outfits.

Here are the reproduced outfits. 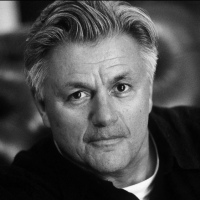 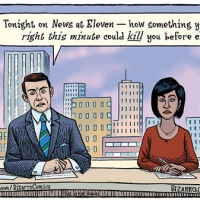