Baby This, That and The Other

During the 1970s in particular more and more interactive dolls started to appear in the shops. I thought that I’d show you a couple of them today. Meet Kenner’s Baby Alive and Mattel’s Baby That-a-way.

I have two Baby Alive dolls in my own collection. Kenner had already been around for twenty-five years and made all sorts of toys including a favourite of mine, Spirograph through their acquisition of Parker Brothers, by the time that the first Baby Alive was produced in 1973. She was a drink and wet doll and became the number one selling doll that year.

I  wrote a post about Baby Alive some time ago so I will quote from that here.

Baby Alive was originally produced by Kenner who released the first one in 1973. She was a sixteen inch, vinyl battery operated  “eat, drink and wet” doll. Baby Alive had a moveable mouth, she came with special food which had to be mixed before being fed to her with a special spoon, then followed by a drink. After her meal Baby Alive wet herself and needed a nappy change. All the succeeding Baby Alive’s performed these and other functions.

Modern Baby Alive often turns up at the Op Shop very much the worse for wear. Sometimes they still work, sometimes they don’t so I just clean them and redress them to be loved for what they are. Baby Alive is now produced by Hasbro who bought out Kenner in the early 1990’s.

In 1992 the first talking Baby Alive was  produced. These dolls would say “I want to go potty.” after being fed however they were discontinued after a short time and a non speaking Baby Alive was produced while Hasbro redesigned the doll. Over time Baby Alive became more sophisticated and interactive and today’s dolls perform a range of different functions, speaking, eating, drinking, moving their arms and going to the toilet.

In the second photo you can see the inner workings of a Baby Alive from the seventies. This one arrived at the Op Shop needing a clean and her pate came right off exposing the workings. I’ve glued it back on but thought people might be interested to see what goes on inside. The following photos are of a couple of other pre-loved Baby Alive dolls who have come home for a makeover.

Hasbro Baby Alive after cleaning to remove ink marks on her face.

If you would like to read more about the history of Kenner and its associated companies you can find information at the Kenner Collector website. This website also has a page where you can download instructions for the 1990’s Baby Alive dolls and for other “Baby” dolls of that era including Baby Check Up, Baby Go Nite Nite, Baby Needs Me and the rather scarily named Baby Did It (what did Baby do?) 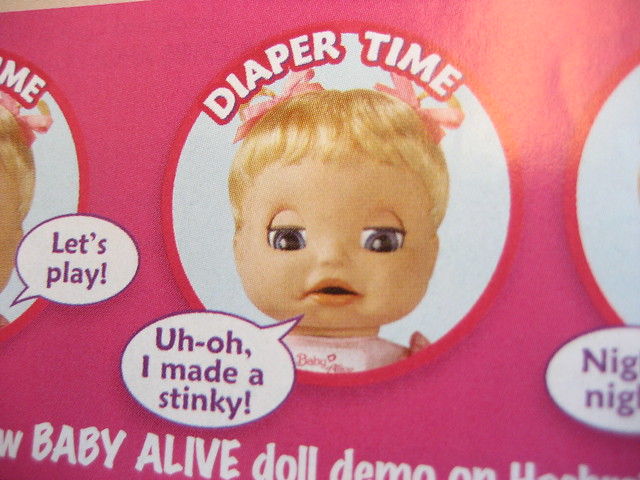 https://dollsdollsdolls.net/2016/11/10/baby-alive/ My previous post about Baby Alive.
http://www.inthe70s.com/toys/babyalive2.shtml  Finally a page of comments from former Baby Alive owners. The page on the 1980s appears to have been hacked. Don’t go there.

Baby That-a-way is a battery operated crawling doll introduced by Mattel in 1974, perhaps the name was chosen for its similarity to Baby Alive but Mattel did have a lot of “Baby” dolls too. Personally I don’t like this type of name, some of them are ridiculous, but I guess it’s good marketing.

Recently a Baby That-a-way turned up at the Op Shop, the first time I’ve seen one close up. She is a similar size to Baby Alive but all hard plastic construction with articulated knees. Her arms are loosely jointed and her head is on a ball joint so it can also move. I haven’t tried to see if she works yet as I don’t have the right sized batteries at home but here is a YouTube video of one working.

Here she is during the clean up phase. I think she has quite a cute face. If we can get her to work I’ll report back.

*Note: I was originally going to call this post “Baby This & That as a joke about all the different dolls named “Baby” something but it turns out there actually was a a Baby This’n’That.