Invasion of the Guys

Or should we make that Skipper’s former boyfriend Scott? This is one of the many loves of Skipper. I found a card inside that read “Limited Warranty”  so that must have sealed his fate. Scott was from around 1979 and was made in the Philippines. He has soft dark curly hair and came with some mix and match clothing and roller skates. Of course roller skating was all the rage back then. The skates in the box are quite nice ones with wheels that really turn so you can actually make Scott skate. It says “Make him do figure 8s” What if he didn’t want to???? Maybe that led to his early demise. The box has really nice graphics and I think Scott was actually a good quality doll to buy if you liked playing with Barbie. I don’t think he looks very much like he is depicted on the box however. The box shows him with more wavy hair rather than a big curly afro. He was sold in US stores for around $7.87. I can still read the ticket on the box. What I thought was interesting was the one bent arm. I’m not sure if they made many dolls with one bent arm going back to 1979. Anyone know of any others?

Recently my friends Gillian and Bruce in Melbourne celebrated their wedding anniversary with a special outing to the city with Dusty, Gillian’s assistance dog. Dusty is a Lions Hearing Dog but also a loved member of the family so of course the outing had to include him. Gillian found out about a company who specialised […] 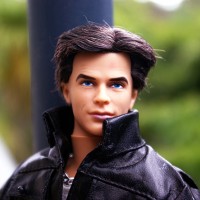